History of the Gallery

History of the Pannett Art Gallery

Pannett Park and The Pannett Art Gallery exist thanks to the generosity of Robert Elliott Pannett. The Park and Art Gallery were built with money and assets he bequeathed, for the benefit of local people and visitors. The Whitby Literary and Philosophical Society later built Whitby Museum onto the Gallery.

Robert Elliott Pannett was born in Whitby on the 7th February 1834, the younger child and only son of William Pannett, a manservant and hairdresser who had moved to the town from Littlehampton, Sussex. Robert Pannett lived in the town throughout his long life except for the ten or eleven years which he spent in London studying law.

He was apprenticed to Thomas Broderick Simpson, solicitor of Baxtergate, at the age of twelve, later serving his articles with him. On Simpson’s retirement, Pannett was assigned to Bell, Broderick and Grey in Flowergate. Pannett studied law in London and on qualifying in 1858 he returned to Whitby and entered into partnership with Matthew Grey, later being in partnership with Matthew’s son William Seaton Grey. He retired from legal practice in 1896.

Robert Pannett also spent his life in local government and held many positions of responsibility. After 22 years as Clerk to the District Local Board he became a County Councillor and later Alderman. He sat on several committees and would have spent many hours on the long train journeys to Northallerton. He was a J.P., a Director of Whitby and North Yorkshire Building Society, Chairman of Whitby Waterworks, a life Governor of the Cottage Hospital and a supporter of many charities. He joined the Whitby Literary and Philosophical Society in 1861 and served on its Committee from 1862 until 1920.

Robert Pannett became one of Whitby’s most generous benefactors. He was interested in various economic activities including agriculture and fishing and was particularly interested in Education. He was instrumental in establishing a well-built and well equipped senior school in Whitby. He also paid for the installation of elegant lighting on the West Pier; he had a drinking fountain placed in town; and most of all, helped the Wesleyan Methodist Community to build or improve their churches and schoolrooms in Fylingdales, Church Street, and his own church in Brunswick Street where, with his friend Thomas Warters, he built a handsome schoolroom lit by stained glass windows in a contemporary design. He contributed over 300 books which he helped to distribute each week, and in his will left money to install a good organ with a border of beautiful tiled panels.

Outside his legal work, his local government commitments and his charitable works, Alderman Pannett’s main interests were in literature and art. He collected paintings and artefacts, some of which he bought on his travels to London and abroad. Though most were of a traditional nature he was also interested in contemporary art movements including two beautiful tapestries by Edward Burne Jones.

Chubb Hill Estate, the land that now forms Pannett Park was originally used as Market Gardens. When he learned that this land was for sale he bought it to prevent it from being developed as a building plot. In his will, dated October 1917 he left sufficient funds to arrange for it to become a public park and site for:

“…the erection of a public museum … for the reception and preservation of my watercolour drawings, works of art, objects of natural history and other things…”

This Public Museum is what we now call the Pannett Art Gallery, which opened 1928 and which houses much of Robert Pannetts’ collection.

Robert Pannett died 22nd July 1920 and is buried in Whitby Cemetery where a plain gravestone marks his grave. His real monument is the magnificent Pannett Park and the elegant Pannett Art Gallery with it’s wonderful collection. 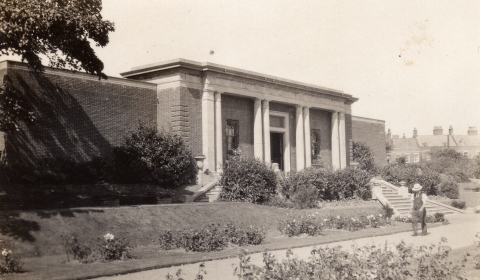 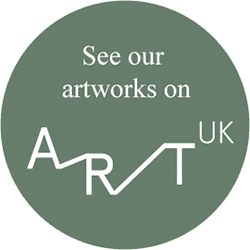 Art UK is the online home for art from every public collection in the United Kingdom.
Art UK are putting the nation’s art online, in partnership with over 3,000 public art collections.

There are already over 200,000 artworks on Art UK and the number’s growing.
Visit the Pannett Gallery artworks at Art UK
(opens in a new tab)